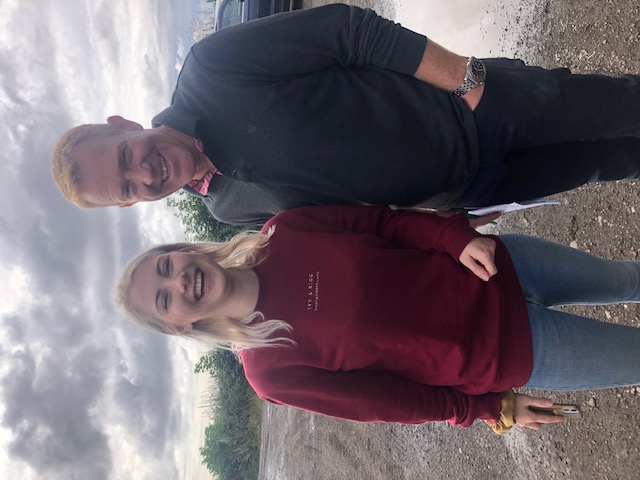 Many children want to be doctors, or bus drivers, or the classic ‘I want to be a pop star’, however, my children (especially Robyn) just wanted to be some kind of odd outdoors person who’s on Countryfile. Finally, success is coming on Sunday! I must admit, every time Kate Humble came on the tele she would turn to Chris and I to announce ‘I could do that’ – lo and behold, she can.

For those who don’t know, BBC’s Adam Henson came to us last Tuesday to film a Countryfile segment all about our pigeon corn, pumpkin patch, and Robyn’s ‘soap empire’. It was a truly surreal day for us all, but one we won’t forget! Probably the most odd part for me was the producer saying Chris should keep his holey North Face fleece on rather than getting changed, to look more authentic.

The craziest part of this whole thing is that Robyn was approached by the BBC rather than the other way around, they had been sent her Veganuary piece from last year by BBC Look North and then realised we are full of diversifications on this farm too! It’s been really nice to feel recognised, although it is hard to keep it a secret for so long, we did though, since we didn’t believe it was true until their cars turned up in the driveway.

We’re also so excited to represent pigeon food, wild bird food, bird food, grain, diversifications and Northumberland – it’s a fantastic county, and that is a fact since it was backed up by Mr. Henson himself!

We were filming from 9am-3pm with the production team, besides a lovely lunch break with them all (Adam Henson from the tele sat in my seat at the table!!), so we don’t really know what has and hasn’t made the cut yet in terms of what they leave in the segment. On Sunday we will update this blog more, but for now, we are all just waiting in anticipation – and Robyn is checking the soap they made together every day, of course!

Fingers crossed we don’t look as mad as we actually are on this farm at 8pm Sunday on BBC2!

​​A farmer’s wife who cannot garden: a saga

We used to Plough the Fields and Scatter

Its going to be a Spooktacular Pumpkin Season