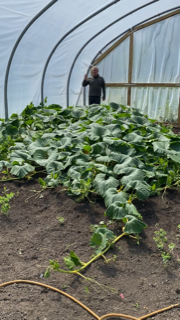 We’ve been keeping quite a big secret for a while now, with an emphasis on big – you could even call it… giant.

Last year, as you’ll remember, we had an absolute blast doing our pick your own pumpkin festival, and we are so excited to be doing it again. Of course, that isn’t the secret (or if it is, then we’re terrible with secrets), our secret is that we’ve been growing some Atlantic Giant pumpkins in our massive commercial polytunnel!

We didn’t want to announce it until the plant was mature and was definitely going to produce a pumpkin, you never do know with farming, and we were very sad when our sunflowers didn’t grow last year! We never can just do normal things at Laverock Hall, my husband thinks he’s a maverick, and I think he’s a madman, but we digress!

This pumpkin is going to get so large that it could be around 600kg (1000lbs for those like me who work in old money), we will probably have to take the door off the polytunnel and will be transporting it via a forklift we generally use to move tonnes of bird food around with! That is going to be some crazy day.

Every day that we go and visit it we can see the huge growth, yesterday Robyn went out to have a look (she didn’t believe us that it had grown another few feet in only 4 days), and she said it took her 13 steps to walk from one end of the vine to the other! Considering that pumpkin has another 15 weeks until Halloween it is growing at a rate of knots. The secret to the growth, I think, is that we’re using the manure from my lovely donkeys, Thomas and Gerrard, it’s supposed to help the pumpkin grow a lot and when we’re comparing it to other people’s online it does seem to be doing well! So, the boys can have an extra cold carrot this evening!

Next, you may be wondering whatever we will do with a vast pumpkin, we’ve had a few ideas – the maddest one was definitely Chris’s friend who would like to hollow it out and row it down to the sea (it happens in America, google ‘atlantic pumpkin giant race river’ if you’d like a giggle). We think we have probably settled on our favourite ideas though, we have 2 growing so at least we could pick the top 2! The first idea is that we will hollow one out as a massive pumpkin jack o lantern, probably with a chainsaw by the size of them, and the other one we will be doing a ‘Guess The Weight Of The Pumpkin’ for a small donation to give to a charity. The winner will get an undecided prize, but we just can’t wait to introduce you to what we’re growing down at Laverock Hall.

Countryfile
Why I love hedgehogs