Am I married to Jeremy Clarkson? 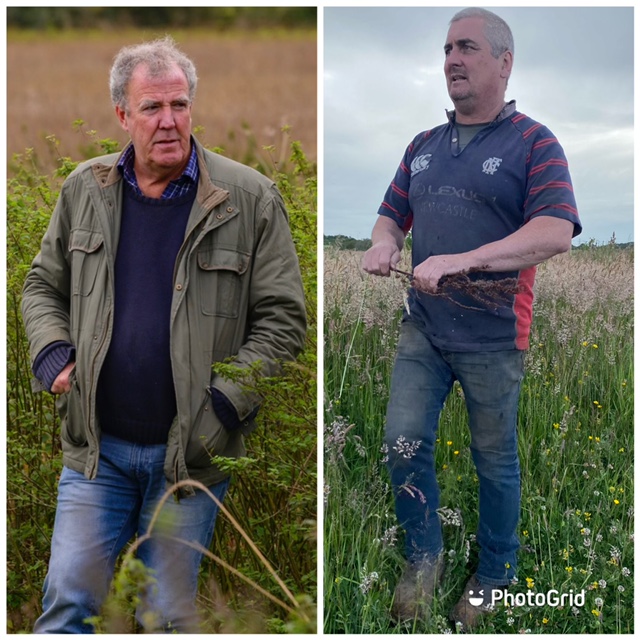 This week’s blog is somewhat different to the usual – since this week, instead of doing our own farm work, we have instead been watching Jeremy Clarkson making a meal out of making meals! We were sitting in the lounge laughing away at Mr Clarkson making a measly £144 and drawing so many parallels of the perils of farming that we realised that our wacky farm had its own version of the Diddly Squat Farm family. So, without further ado, introducing:

My husband is Clarkson-like for his silly outbursts and love of cars before he even began farming, but now it seems they are even more similar! I saw Jeremy planting all his veg, and it brought back vivid memories of our own time last year when Chris came into the house and proudly exclaimed that he had bought an inordinate amount of pumpkin seeds – brimming with pride and exclaiming about his joy for children to come pumpkin picking was very akin to Jeremy planting veg for his farm shop – alas, if you’re reading this you will know we already have the farm shop covered!

The next similarity is the conservation, this was a large focus on the Prime TV special, but I think Chris is even more special since he does nothing for camera crews, and truly loves all the less pretty species we have here too – we would also not be catching and eating any fish that may start to grow in the huge ponds that Chris has built, I may add that he built them with a bit more finesse than Mr Clarkson achieved.

Jeremy as a patriarch of the farm is very true for Chris here too, he knows all, and he always has the most inspiring ideas. I have stood with him and watched fields of millet (native to Africa) fail, since it was worth a shot – something I feel that Jeremy would certainly try too! Perhaps another special?

George, (our son) as Kaleb

Jeremy’s ever faithful sidekick in the show responds to the wacky ideas in a similar way to George, often quite stubborn (to be polite!) at first but does get very much stuck in!! Kaleb is full of sass too, and I can think of a few instances of passion that have resulted in things being thrown into fields. One thing I can say for both George and Kaleb is that I am very glad farm boys wear steel toed boots, since they always find something to kick when things go pear shaped!

There is a good attribute that the boys do share, of course, and that is the trust that their farmer has in them – I know that George would definitely be trusted with our wasabi plants, and Chris was trying to think of areas where we had running water… Perhaps we should watch this space… The final thing that they have in common, is their fantastic trailer skills, George must have got that from Chris, since you’ve all seen me drive a tractor!

Valdine (me), as the faithful Lisa

Any of you who may have come into our shop on a Sunday would have noticed my true Lisa-likeness, a sunny disposition, fresh ideas, and the farmer constantly rolling his eyes! I also get about as involved as she did with the machines, a bit of directing tractors and no more! It’s up to them since they put it in the ground to start with! I feel Lisa and I share one thing truly, and that is we are both left to mop up the random ideas that the farmer has got so far and then given up on, or it has needed a lady’s touch. You can see this with our pumpkin advertising, which was done by me, otherwise, we would’ve had a lot of squash and no 7 million followers to rescue us like Jeremy! Lisa does this by standing in that shop all Summer, and feeding his fish, and bottling his (apparently) undrinkable water. Since Lisa fell in love with a man in London, and I came from a farm 4 miles away, I think she may even be doing better than me, although I’m sure I’d give it some extra welly if there was an Amazon man filming my every move!

Gerald is a fantastic man who has worked on Jeremy’s farm for 50+ years, doing dry stone walling and helping at harvest, he is also notorious for being impossible to understand. Chris has a few friends around here who could fit the Gerald mould, but none more so than Dean – Or Geraldine, as he is now affectionately known. Dean is our resident handyman and paver, who turns up on the wrong day, always has a truly amazing story to tell and will make our farmer laugh, no matter what. Sometimes he does confuse people who don’t know him, similar to Gerald too… We also know that Dean is our Gerald since today he called the farmer and said ‘why is everyone so confused by that Gerald on Clarkson? I can understand him.’ From this we have deducted that perhaps this is like parseltongue – you’re born with understanding it, or you’re not! Either way, it’s the Gerald’s of the country that really do keep places like ours firing on all cylinders.

Now, we have a number of agricultural people that we turn to for support and guidance, perhaps less often than Jeremy, however, it definitely wouldn’t be fair to drag them into this blog post since they’re just doing their job. Although, if you are one of our farm confidents, then hello, and stop reading our blog, it has nothing to do with our seed!!

Its going to be a Spooktacular Pumpkin Season
Pondlife update

Not just for the birds